It has been 25 years since the last episode of The Kids in the Hall aired and 30 years since the first episode aired in 1989. For better or worse, Amazon Prime has decided to reboot this aged title. I loved The Kids with a passion back when I was a wee kid myself, so I am cautiously excited about the reboot. At this point they are hardly kids though, but maybe we will be able to get past that part and revel in the nostalgia? I hope so, because I have waited for this for a long time.

They managed to get all five original cast members and Lorne Michaels on board, but that didn’t help the tepid Brain Candy – a movie that I am told was like the later Beatles works, each member came with bits prepared and then they cobbled together a movie from that. The members weren’t working well with each other then, so let’s hope that they have learned how to become a family again. The sum of the parts being greater and all that. Amazon has picked them up for 8 episodes. Will that be enough?

Read the full press release from Amazon Prime below.

TORONTO–(BUSINESS WIRE)– (Nasdaq:AMZN) – Amazon today announced that the critically-acclaimed sketch comedy series, The Kids in the Hall, will be making a comeback on Prime Video. With the return of all of the original “Kids,” the 8-episode Amazon Original series, which will be a continuation of the original show, will be available to Prime members in Canada and around the world in more than 200 countries and territories. 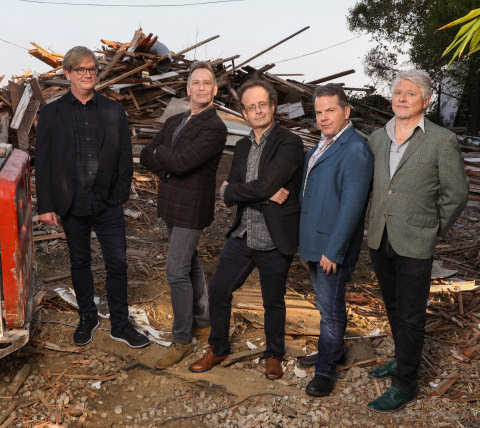 Amazon Prime Video to bring back The Kids in the Hall with new episodes as first Canadian Amazon Original Series (Photo: Business Wire)

First premiering in 1989, the original Emmy Award-nominated The Kids in the Hall starred Canadian comedians Dave Foley, Kevin McDonald, Bruce McCulloch, Mark McKinney and Scott Thompson. All of the original “Kids” will be reprising fan-favorite characters (and assuming some new ones) for the series’ next iteration. The original series earned multiple Gemini Awards along with the cast being honored with the Canadian Screen Awards ICON AWARD in 2019. The series will be executive produced by Saturday Night Live creator, Lorne Michaels.

“We’ve been investing in Canada for several years and are excited to add to that momentum by making The Kids in the Hall the first Canadian Amazon Original series,” said James Farrell, Vice President of International Originals for Amazon Studios. “The Kids in the Hall is an iconic show with a deep-rooted fan base. Several of our global hits, including The Boys, Tom Clancy’s Jack Ryan and The Expanse have been filmed in Canada and we are looking forward to continuing our work with talented producers and crew teams across the country to bring this series to our Prime members around the world.”

“Even after 30 years, The Kids in the Hall has retained its brilliance and originality,” said Executive Producer, Lorne Michaels. “We are happy to be bringing back all of the original ‘Kids’ for the new series.”

Since 2015, Prime Video has filmed 18 Amazon Original series and films in Canada, including The Man in the High Castle and the upcoming series Upload in Vancouver, The Boys and The Expanse in Toronto, the upcoming Tales from the Loop in Winnipeg, as well as parts of Tom Clancy’s Jack Ryan and the upcoming film, The Voyeurs in Montreal. The Kids in the Hall will be the first Canadian Amazon Original series and follows the release of Amazon Original series that have been launched around the world in countries including Brazil, France, Germany, India, Italy, Mexico, Japan, Spain, the U.K. and the U.S. The series will join thousands of TV shows and movies in the Prime Video catalogue, including award winning and critically-acclaimed Amazon Originals such as 2020 Golden Globe and Emmy award-winner Fleabag, Emmy and Golden Globe award-winner The Marvelous Mrs. Maisel and the recently released Hunters, from Executive Producer Jordan Peele and starring Al Pacino.

With a potential postal strike or stoppage looming around Amazon’s Prime Day, it’s the perfect time for the online retailer to launch their own delivery service in the Great White North.

As online retailer Amazon begins teasing deals they’ll have available July 12 for Prime Day, talks between Canada Post and the Canadian Union of Postal Workers have broken down. There’s a potential lockout coming this week and with that a work stoppage (or strike) is possible.

Amazon doesn’t seem too concerned about this and, according to a statement the company sent me, they are “monitoring the situation with Canada Post and working to mitigate any potential impact on customers.”

RELATED: Not available in Canada

Considering one of the selling features of Prime Day in Canada is that there will be three times the amount of laptop units available than there was on Black Friday and Cyber Monday combined, it’s safe to say “potential impact on customers” could be huge (Canadians love their deals).

Along with laptops, Amazon promises thousands of items will be on sale for Prime customers to eat up during Prime Day. It’s highly unlikely they can use a service like FedEx or Purolator while keeping the cost of shipping down (or free) if there is a postal strike. They also know better than to pass along extra expenses to loyal customers (especially ones that pay a yearly fee). And what about the small businesses and private sellers on Amazon? They can’t afford to lose money and are key at keeping Amazon’s model afloat.

This leads to a few possibilities. Amazon can take a hit and lose money (possible), scale back on sale items during Prime Day in Canada (highly unlikely) or use this as an opportunity to launch their own delivery service in the Great White North (I’m championing for this third option).

The idea of Amazon launching a delivery service in Canada is not that wild. In select U.S. cities, like New York, Seattle and Tampa (among many others), they are already running a service called Amazon Flex. They deliver seven days a week and can even get packages to customers within hours in some instances.

RELATED: Apple TV gets The Shopping Channel in Canada

Amazon has shown they are invested in delivering their own packages around the world in the long run. They’ve mentioned they want to use drones in the future and, according to Forbes, they are looking into leasing jets. If they launched Flex in cities like Vancouver, Toronto and Montreal during a postal strike/stoppage, they are sure to make customers happy and keep them coming back. Sure makes sense to me.

Do you think Amazon should launch a delivery service in Canada? Are you concerned about Canada Post going on strike? Share your thoughts in the comments below or at facebook.com/bamcatBuzz.